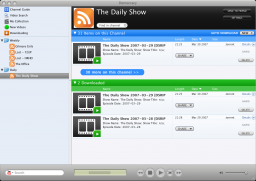 I first heard about Democracy from the MacBreak Weekly podcast a long while back, but didn’t pay much atention to it until recently. In a nutshell, its another multiplatform video player. It plays DivX, XviD, QuickTime, WMV, blah blah blah, movie formats… Just like any other player. Great…

But what sets Democracy apart from other players is that it has built in RSS feed support and a BitTorrent client! This means that with sites like tvrss.net, that you can create your own RSS feeds for the shows you like to watch (i.e. Lost and Gilmore Girls), and the Democracy player will poll these feeds every hour or so, and download the file as it becomes available.

I just started using this last week, but have already pulled down a few of my favorite shows, and it seems to work great. There are options that you can set for each RSS feed, such as auto-download and auto-delete as you watch them or as you run out of space, or even ‘only download if I don’t have more than 3 unwatched episodes’ type of settings. That said, I did find that there were some options that I’d like to set that were not available (like how long to seed files for after downloading, or how I want my files named and organized for instance), but not enough to make me really complain or even hesitate at recomending this to someone else. The interface is easy to use, it works, it l ooks great, I like it!

This all being said, I’m not sure on the legality of sites such as tvrss and downloading Network TV shows, but really, both the shows that I care most about are broadcasted over the airwaves for free anyways, so I just see this as another means of recording that. These shows do generally remove the comercials from the episodes, but I think this is an envitable change that creaters of shows are going to have to deal with as digital media becomes a larger part of the average person’s life. Feel free to comment here if you want to have this discussion.

But back to the point of this article. Democracy the player rules. Check it out!